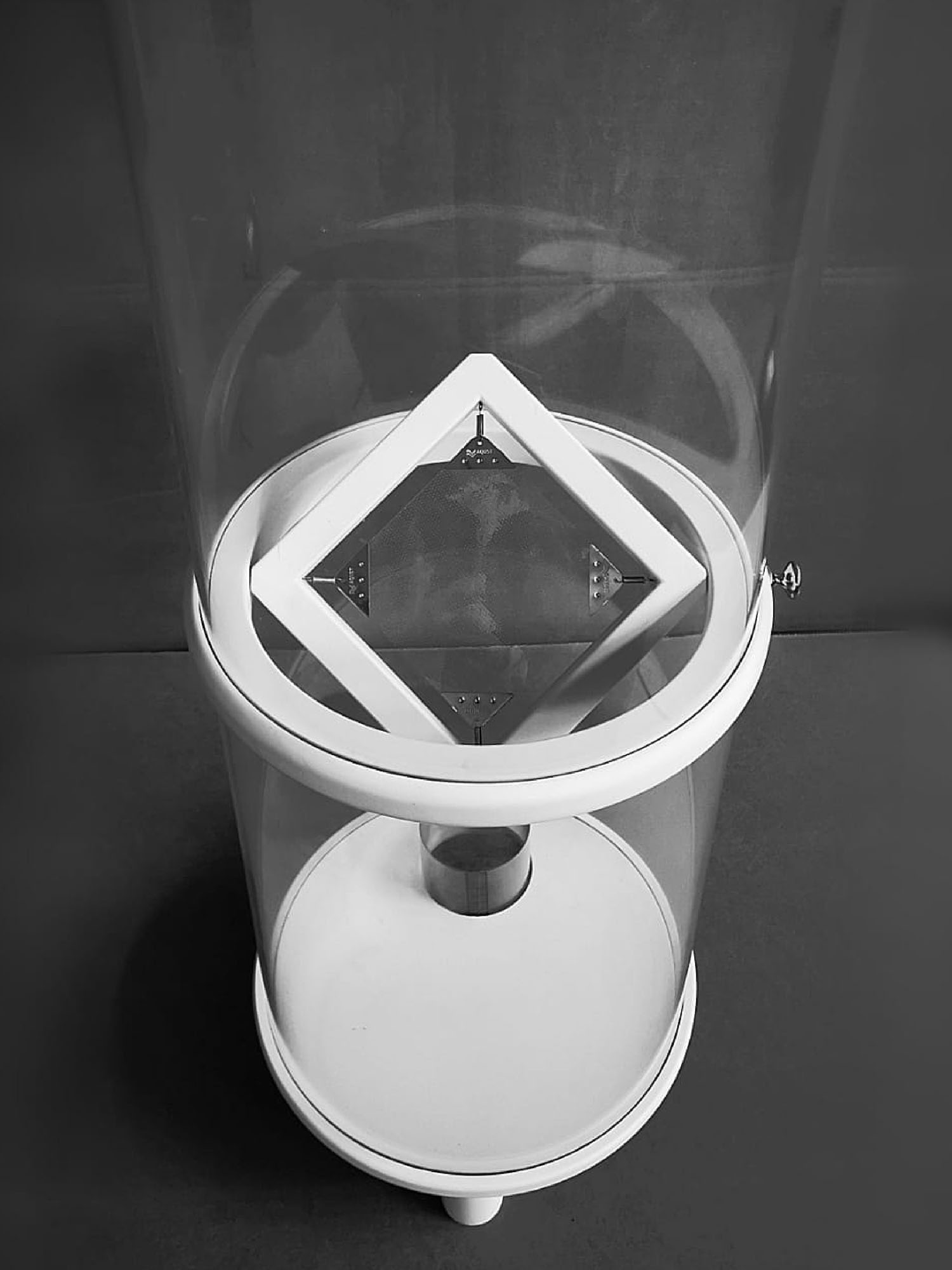 In a given listening room there are two or more loudspeakers that produce sound pressure within a space bounded by walls. The loudspeakers produce energy fields which only partially arrive at the listening position directly. A significant percentage of sound reaches the listener with variable delays after having bounced off of walls, floor, and ceiling, while also having re-passed through the area occupied by the loudspeakers. This all creates distortions and a confused sound picture.

If we observe this scene from above and consider the room not as a 3 Dimensional volume but as a liquid 2Dimensional surface, we can greatly simplify our visual example. Think of the surface we are looking down on as a kind of rectangular swimming pool.
Now imagine two identical balls which fall into the pool symmetrically, away from its walls, one on the left and one on the right. These points of impact represent the locations in which the loudspeakers are found in a listening room. It’s easy to visualize the entry of each ball causing a circular ripple that expands outward from the points of entry.
The waves spread, expanding outward until reaching the swimming pool walls. Where each wave reaches a wall, a new wave will be generated in the opposite direction. This secondary wave will superimpose upon or nullify the previous wave. What we have described occurs at the boundary where the wave encounters an obstructing surface, but obviously, the two circular wave flows will propagate toward the middle of the swimming pool, where they will also ‘crash’ into each other. In this case, the two wave flows will interact, transforming them into something other than the original waveforms.

VOLCANO is sealed on a wooden ‘summit’ with a ‘crater’ in the centre. This top part, shaped like a crater with a hole in it, is the inspiration for the name. The underside of the top is a shallow curve of a very specific shape. This curved shape, the diameter and the shape of the crater, are of fundamental importance and essential to the performance of the Volcano.

These parameters have been extensively studied by Acustica Applicata, going through several prototypes and hundreds of hours of listening and measurement tests.

The standard VOLCANO is in two parts: the upper and lower parts are linked by a round wooden flange, which supports the orientable internal membrane. These parts are not glued together but are plugged into their working position by round tracks carved into the wooden flange; this allows easy access to the internal chamber for cleaning or adjusting the position of the tuning tube in the base (it is also possible to adjust this tuning port from the outside from underneath the base). Furthermore, this allows the stacking of additional extension Plexiglas modules, increasing the internal volume and lowering the resonant frequency (down to 25 Hz); this can extend the use of the taller Volcano to corner positions in large rooms or attic spaces with angled ceilings.

Adding a Volcano to your Hi-Fi system will give clear improvement with the impact and depth of low frequencies, an increased 3 Dimensional representation, along with significant tonal balance correction. The perceived average volume will also increase, but above all else, dynamic contrasts become startling. In its standard configuration, VOLCANO is 105 cm. tall (41”), with a diameter of 38 cm. (15”). The body is transparent Plexiglas, with end caps in wood uniquely shaped to a specific design. VOLCANO is effective down to 35 Hz (with the additional module, down to 25 Hz).

The base contains a port of 10,5 cm. (4,1”) diameter, and within it a cylinder mated to a special acrylic layer, by which (simply pulling or pushing up and down) tuning of the device resonant frequency is achieved. The height of this cylinder within the Volcano tunes it to obtain the best depth and speed of the low frequencies within the room. This adjustment method was inspired by a device used by lute builders at the beginning of ‘900; its name was Tornavoz and it was used to increase the sonorous projection and low frequencies of their musical instruments. When playing low frequency through the music system, the cylinder can be moved up or down until the speed and depth of low frequencies are maximized.

Obviously, the suggested positions along the walls can be shifted considering the available space; the important thing is to remember that those are (together with the corners of the room) the points where higher levels of sound pressure exist.

This December, we are hosting another Lowering the

Welcome on board to our new dealer Infidelity HiFi